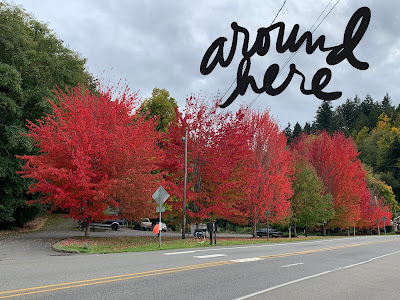 It's been a crazy few weeks (months) but I'm getting back to some sort of schedule, really trying to budget my time better (translation: watch less Netflix lol!) so that I can get back to regular blogging.  I have really missed it and thank you to those of you who are still following.

In my last post, Vic had returned from Okinawa, spent three weeks working around the house, and then we left for Maryland to get him settled.  A new truck, an apartment, a new bed and household goods scheduled to be delivered, and basic bearings sorted.  I flew back to Washington and went back to work, counting down the days until his next visit.  That has come and gone so here's a quick photo recap of the last twelve weeks. 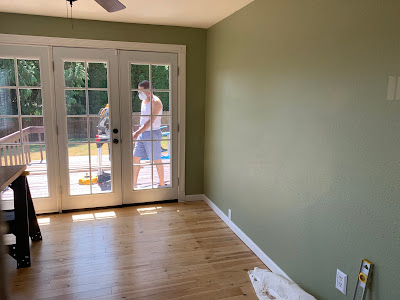 First on Vic's list was to remove the heavy texture on the walls of morning room and repaint.  We chose Behr's Silver Bullet which was a very pale grey.  It took longer than expected because the texture was very heavy so it needed some sanding and then several coats of drywall compound to make a smooth finish for painting.  I developed an intense loathing of drywall dust - even though Vic covered the opening to the living room with heavy plastic taped down well, that darn stuff still made its way out! 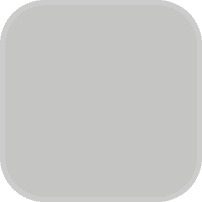 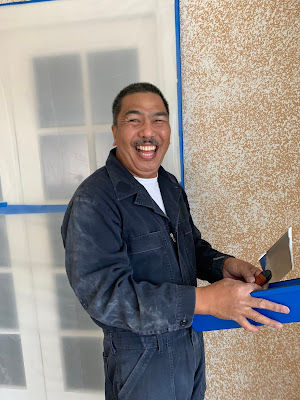 A sense of humor helps with any home improvement project! 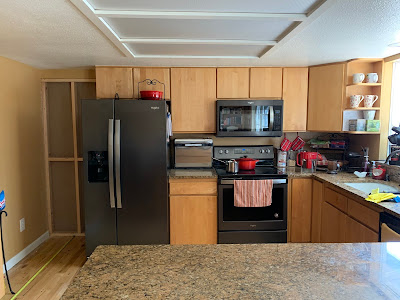 The area to the left of the fridge is the former opening to the morning room which Vic walled over.  We went to Lowe's and came out with a kitchen design.  The cabinets installer came out to look at the job and that's where the issues (not problems, issues) began.  The soffit (not really visible here, just the lighting - the soffit is where the lighting is located) cuts almost twelve inches off possible kitchen space so that has to go.  The cabinets installer doesn't do that kind of work so we'll have to get a contractor.  There are three electrical outlets at a low level (you can just see one on the left of the photo) and they will have to be raised to above the new counters.  The outlet for the refrigerator which is quite high, will have to be lowered to accommodate the connection for the new refrigerator drawers that are counter height.  The cabinets installer doesn't do any of this work either so we added it to the list for contractor.  The cabinets installer will remove all the cabinets and haul everything away and remove the appliances but all for an additional cost. 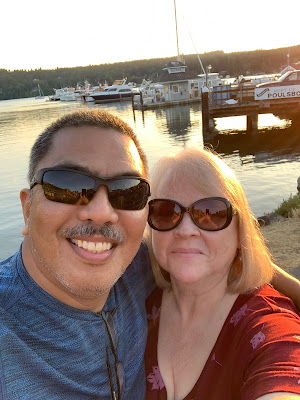 We managed a night out for dinner by the bay.  This is probably the last time we'll be able to eat out as Vic's new command dictated that there will be no inside dining during the current COVID crisis.  Takeaways it will have to be. 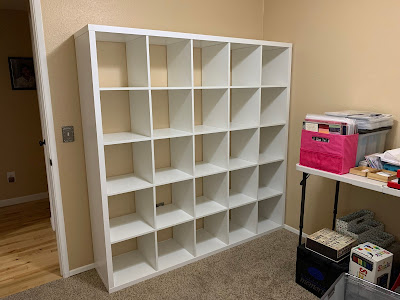 In between waiting for coats of drywall compound and paint to dry, Vic put together my new IKEA Kallax unit for my scrapbook supplies.  Major fail!  We slide it down the hallway only to find out that we couldn't get it through the door of the craft room.  We had to slide it back into the living room, disassemble half of it, slide it back, and complete the assembly process in the craft room.  What was I saying about a sense of humor being necessary? 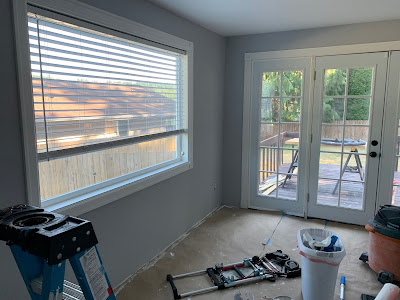 The morning room was coming along nicely. 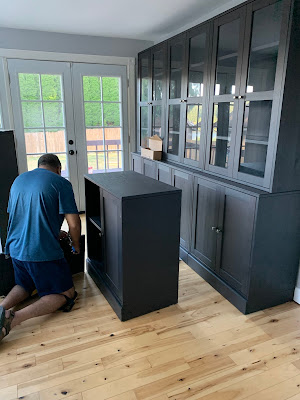 All painted and dry, Vic began the process of putting the library cabinets in place.  Books on top, albums on the bottom.  House fail this time!  The floor wasn't level.  We headed across the Sound to Rockler to pick up levelers that had to be installed on the four corners of the four cabinets to get them all the same height. 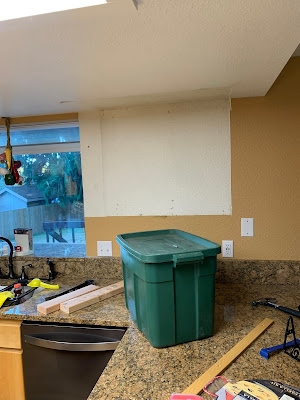 Back home, morning room done, time to attack the kitchen.  Completely forgot to take a picture of the finished morning room and right now, the dining table is in there covered with all the things from the kitchen cabinets.  Cabinet one (to the right of the window) came down.  Did I mention that we decided to replace the garden window as well? 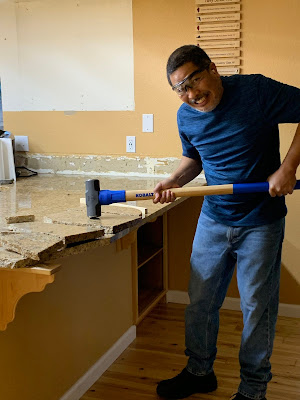 Kitchen cabinets came down, were broken up, and hauled to the dump.  Time to attack the granite.  It was in an awful state, badly pitted, and I hated the color, so hard to see a spill.  The new kitchen will have quartz.  Vic loved his new sledgehammer. 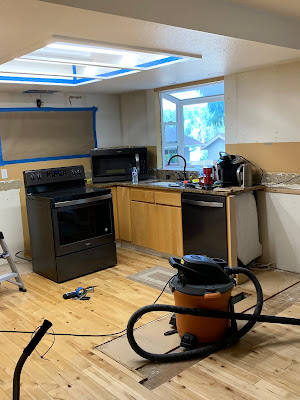 By the time we needed to pack up for our trip to Maryland, this was all that remained of the kitchen.  The blue-taped brown paper area covered very badly gauged drywall from the over the stove microwave and hood combination.  You can also see missing flooring where the old cabinets had been. 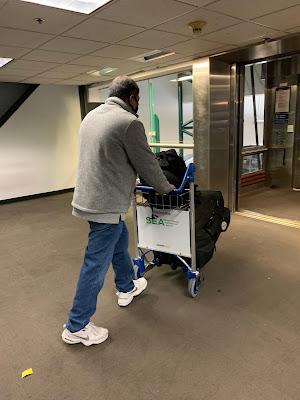 Off to the airport we went. 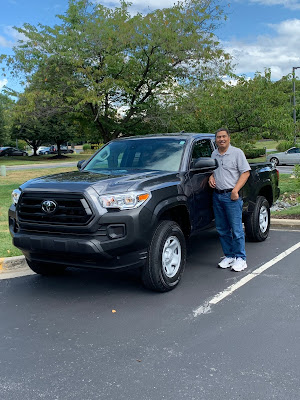 The following day, Vic had a new truck and we returned the rental car to the airport. 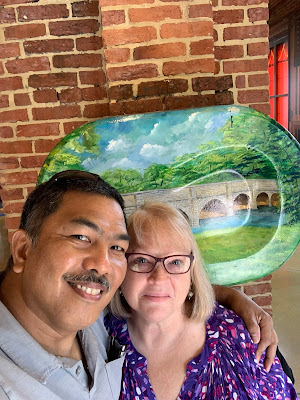 We managed to do a little sightseeing in downtown Frederick but oh my goodness, I will never visit again in the summer.  HOT and HUMID, even in caps for emphasis, I cannot tell you how miserable it was.  Our few days together came to an end and I headed back to Washington and back to the office after a month away.  Vic started his new job and is busy in training and learning his new responsibilities. 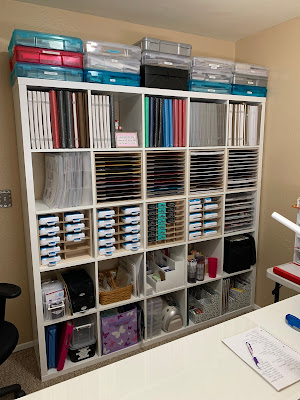 At home, I organized my scrapbook supplies - so nice to have everything in one place.  My desk sits in front of the wall unit so I can just swivel around to reach what I need. 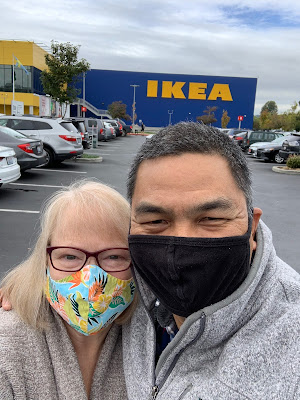 Vic was back again the middle of October.  We headed to IKEA again for a few things and stopped at the really nice mall south of Seattle (had to get my Container Store fix and pick up supplies from LUSH for Sophia's Advent calendar), plus a trip to Chick-fil-A since there isn't one on our side of the water. 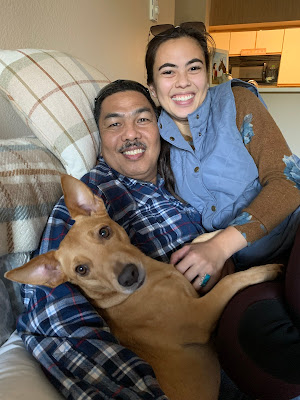 The following day, we headed up the Bellingham to see Sophia and Spectra. 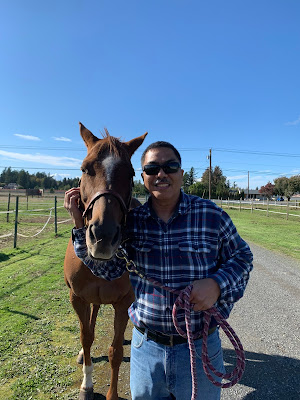 We headed out to the barn so Vic could hop on Ginger for a little ride and... 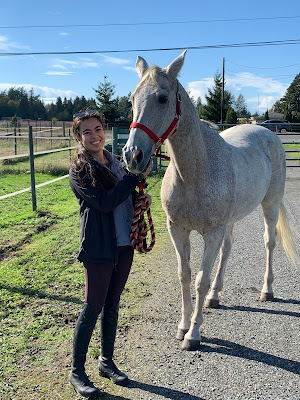 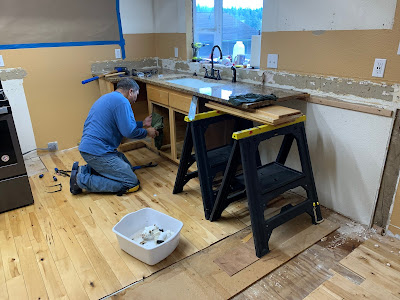 Back home to knock out the rest of the kitchen.  The last cabinets and granite as well as the sink were off to the dump. 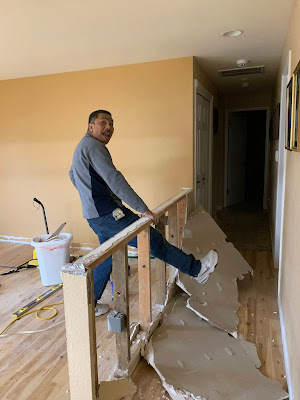 The half wall was the next to go.  Vic had to go into the crawl space to saw the end post in half to remove it. 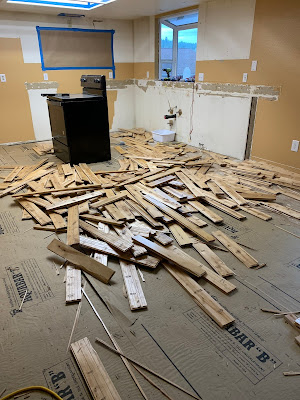 After another flooring company came by to take measurements for a quote, Vic decided to remove the old flooring himself.  Up it came. 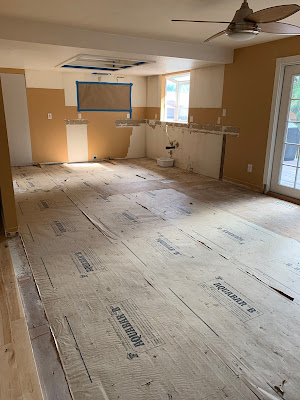 And that, my friends, is my current kitchen.  I have a small table with a microwave and toaster oven in the meantime.  I'm still trying to narrow the contractor down on a date and we're off on the great backsplash and wall paint color search.  I'll take you along the way but it's going to be a while as the cabinets are on a five month delivery delay.  2021 is definitely the year of delays.
Hope you're all still awake, thanks for staying with me through this.  Have a great week!
Posted by Pamela at 12:00 AM

Email ThisBlogThis!Share to TwitterShare to FacebookShare to Pinterest
Labels: Around Here