It's Wednesday so it's time for the Hodgepodge.  Click here to join in.

1. Is March coming in like a lion where you live? Aslan, Simba, Elsa, The Cowardly Lion...your favorite 'famous' lion?

I wouldn't say it's coming in like a lion.  After Snowmageddon over the Presidents' Day weekend, we're now on the way to a Washington spring.  Partly cloudy, rainy, some sun, we can have it all in a week but everything will be sprouting and blooming and it will be lovely.

My favorite lion is The Cowardly Lion because Vic does the most amazing impression of him saying "I don't have courage" which is often his response when I ask him if he's going to do something without me.  He's so funny.  I sourced Hallmark's Cowardly Lion ornament (it's a past issue) and put it in his Christmas stocking last year and he burst out laughing when he saw it (and did the impression)!

I don't know that I do.  It has a negative connotation, doesn't it, to do your own thing without considering others?  That's so not me, I'm more looking to benefit others by my actions.  It will be interesting to see the answers to this question.

3. What item that you don't have already, would you most like to own? Any chance of that happening soon?

I go back and forth between a Silhouette cutting machine (I really want one vs. will I actually use it?) and an Apple iMac computer (how nice it would be to have a giant monitor vs. yikes, that's really expensive).  You can see my back and forth!  I think there will be a chance for one or the other as soon as we sell our rental property and can have a little splurge. 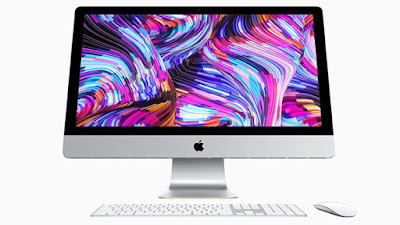 4. March is National Flour Month...are you a baker? Cookies-cakes-or pies...your favorite sweet treat to bake? What's the last non-sweet thing you made that called for flour?

Yes, I like to bake but I haven't done much of it lately because it's just me and that means it would just be me eating the fruits of my baking!  I like to bake cookies and cakes but I haven't baked a pie in a while.  My favorite sweet treat is a recipe from my 7th grade Home Economics class that I searched for for years and finally found it - it was in a Gold Medal Flour advertisement (which is exactly where I found it in the school library all those years ago).  They are so delicious.

I can't remember the last non-sweet thing I made that called for flour.  I've been back and forth with gluten-free so although I'll have bread and cookies occasionally, I haven't actually used flour in cooking for a while. 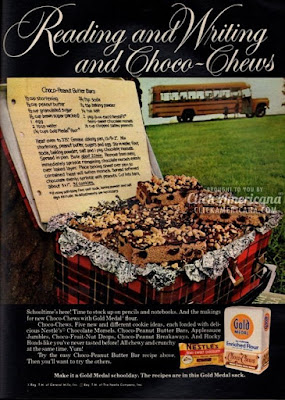 5. There are 31 days in the month of March...where were you and what were you doing when you were 31? If you haven't hit that milestone yet, then tell us where you were and what you were doing 31 months ago? (if math is not your thing, that would be August 3, 2018)

When I was 31, I put all of my household goods in storage, packed my life into four suitcases, and jetted off to take a job with Guam Cable TV.  I had been living and working in northern California, in a relationship that was going nowhere, and when the opportunity came up, I grabbed it with both hands.  A former co-worker was out in the western Pacific and he recommended me to the General Manager of Guam Cable TV.  They flew me to San Francisco for an interview and offered me the job on the spot.  I have to admit that I booked a flight home several times in the next six months - the heat, the humidity, the bugs - but I cancelled each one and persevered.  I ended up being transferred to the island of Saipan, a half-hour flight away, and the rest is history because that's where I met and married Vic, Sophia was born, Vic joined the Navy, and we ended up on this journey that's called Navy Life.

6. Insert your own random thought here.

I had a couple of comments on my Hello Monday and Prime Purchases posts so here are the answers.  Where does saying White Rabbit on the first of the month (when there is an R in the month) come from?  My Mum and aunt were fully of the craziest "things one must do" - sprinkle salt over your shoulder if you knock the salt cellar over, along with never passing the salt to someone (you must put it down and they pick it up), never give a knife as a gift (it cuts the friendship/relationship), and I can't remember all the details of what needed to be done if you dropped a knife on the floor (it involved going outside and coming back in again, turning around in a circle, spitting, and something else although I can't remember the order).  Honestly, the two of them were hilarious.

Anyway, saying White Rabbit was just one of those things I grew up with but I did a little research and it is actually a thing.  Some people say White Rabbit, others White Rabbits, and some Rabbit, Rabbit.  Some say it every month and others only when there's an R in the month.  It should be done as soon as you wake up, before you say anything else, and it is said to ensure good luck for the rest of the month.

The other question was how do the Nora Fleming minis attach to the napkin holder or any of the other serving pieces that are available.  Each piece has a tiny hole and each mini has a long rubber piece at the bottom and you just slide the rubber piece into the hole.  Here are a couple of minis where you can see the rubber piece. 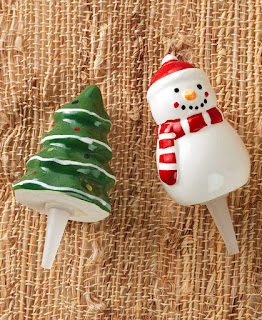 Pamela
I'm Pamela, wife, mother, and diehard Anglophile. Born American but British at heart as they say! My dream is to live in England, anywhere in England, but I'm usually living the reality of making a home for my family wherever the Navy sends us! However, after almost 25 years, the Navy saw fit to send Vic overseas without me but we'll make it work, we always have. Here's to Washington adventures in our forever home and to Vic's sojourn in Japan. I love to read, cook, travel and preserve my family's memories by scrapbooking, traditionally and digitally. Welcome to our world!